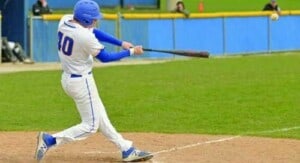 The outfielder is in the midst of a memorable season after retooling his swing during the off-season. Through 12 games, the results have been a key reason for Lyons sweeping a doubleheader against previously unbeaten Oak Park-River Forest on April 21 and winning nine games.  Ferraro set the tone for the sweep, banging out two hits in three at-bats in Lyons’ 4-0 win over the Huskies in Game 1. He added two more hits in the Lions’ 3-1 triumph in Game 2.

Ferraro said he wanted to make an adjustment to his swing after an up-and-down junior season. He batted .302 with 18 RBIs and scored 22 runs last season.

“Last year I was pulling off it, hitting grounders to short,” Ferraro said. “I realized I have to stay through the ball, especially when people are on base. If I can square it up, guys are going to score. That’s my job: to get runs in.”

In 10 games this season, Ferraro is batting a robust .516 with 16 hits, six RBIs and six runs scored to go with a .571 on-base percentage. Lyons coach Kevin Diete said Ferraro’s bat is essential in his team’s quest for a run to the Class 4A state tournament.

“Last year Jack had a really big looping swing,” Diete said. “He got stronger in the off-season, looks like he cut down and shortened it and has a very compact sweet short swing. With two strikes, he has a good mental approach. When an off-speed pitch comes, he stays back further and is able to put the ball into play. He’s really seeing the ball well and able to hit the off-speed pitch.

Ferraro, a right-handed hitter, can play all three outfield spots. He mainly plays in left field. He credited his fast start to his off-season work and gaining some additional muscle to bulk his frame up to 6-foot-2 and 195 pounds.

“I’m trying to hit better with two strikes. Being in the three hole, I get a lot of curve balls, especially late in the count,” he said. “I’m trying to stay back and drive it somewhere and get some runs scored. I worked out a lot since the end of last season, got bigger and worked on hitting the outside pitch more. I’ve been seeing that a lot, so trying to get some RBIs in.”

Ferraro, a Triton recruit and two-year starter, said the Lions are concentrating on winning the West Suburban Silver and capturing the program’s first regional title since 2014. The Lions have lost in a regional final in each of the past three seasons.

“I think as long as we play our best games, the goal is to win state,” he said. “We’re taking it one game at a time. We’re trying to get through the regular season. Come playoff time, that’s when it matters the most. If we play together, we have a good shot.”